﻿COLOR GUARD TRYOUTS ﻿
Your journey with the PLD Color Guard will most likely begin with Color Guard tryouts in the spring of each year. That's right, tryouts! Just like cheerleaders must be able to do a backflip, guard members must be able to dance, spin rifles or sabres, and must possess the necessary flag handling and marching skills needed to be in color guard. We will teach how to do it!

COLOR GUARD CAMP
All color guard members are required to participate in a one-week Color Guard Camp that occurs the latter part of June each year. This camp focuses on teaching dance and equipment basics in preparation for band camp and the upcoming marching season. Full Band Camp runs two weeks beginning around the middle of July and followed by post camp rehearsals. Band Camp is held at PLD High School. You must attend camp to ensure a spot in the competition show. For new members band camp can be confusing and exhausting. The Band Camp Survival Guide is an informational document developed by former students and parents to help you succeed while at camp.
PERFORMANCES
The Color Guard and Band perform at varsity football home games during the season when marching competitions do not conflict. The Band plays the National Anthem at the start of the game, plays pep tunes during the game, and performs the competition show at half-time. The Band also performs at 4 to 6 band competitions which the directors select. These additional competitions can be at local, state, regional, and national levels. Bands compete against other bands of their size-class (based on high school enrollment) and also vie for best overall honors, Best Visual, Visual effect, and Overall effect. Judges at each competition evaluate the performances according to established criteria.

REHEARSALS
Since the PLD Marching Band is an extracurricular activity, the rehearsal schedule falls almost entirely outside of the typical school day. Color Guard rehearsals follow the same general schedule as the Marching band rehearsals with 2 exceptions: Color Guard Camp and Extra Rehearsals.

-Extra Rehearsals:  Color Guard can also schedule extra rehearsals or extended rehearsals on school days that are separate from the rest of the band as well. These are in addition to the full-day rehearsals that may be scheduled for the full band. The Rehearsal schedule is given to each student and is always available on this website.
Winter Guard General Information 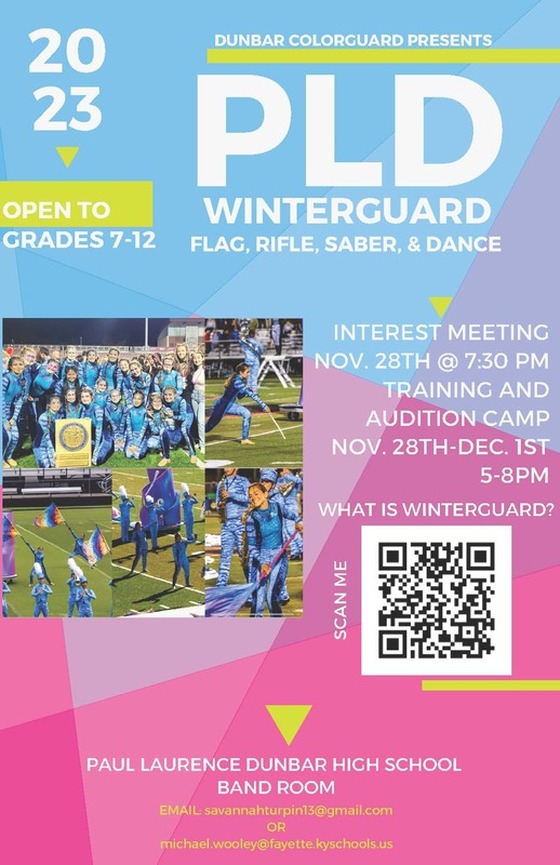 ​Home
​PLD WINTER GUARD
The PLD Winter Guard is an indoor color guard activity which is takes place during the winter season with a smaller group of girls. Unlike color guard, which performs outdoors on a football field, winter guard shows are performed indoors in a gym or arena. The PLD Winter Guard  spends many hours perfecting their dance, rifle, and saber skills for competition in the Tri State Circuit.